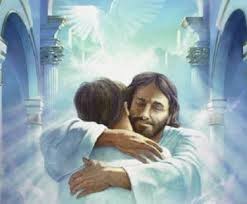 Through Reconciliation, Christians are freed from sins committed after Baptism. The Sacrament of Reconciliation is considered the normal way to be absolved from mortal sins which, it is believed, would otherwise condemn a person to Hell.

Catholics distinguish between two types of sin: Mortal sins are a grave violation of God's law that turns man away from God. Someone who is aware of having committed mortal sins must repent of having done so, and must confess them in order to benefit from the Sacrament. Venial sins, the kind that "does not set us in direct opposition to the will and friendship of God", can be remitted by contrition and reception of other Sacraments, but they too are rightly and usefully declared in confession.

For more information about this sacramental preparation, contact the Parish Office.

The Sacrament of Reconciliation is regularly available 45 minutes before every weekend Mass, 30 minutes before weekday Mass, or by personal appointment with the Pastor.

The Sacrament of Reconciliation as described by Fr. Raphael Mary of the Catholic Newman Center at the University of Washington.